In 2021, Daniel Buckles and Debra Huron were awarded the Ottawa Field-Naturalist Club’s Conservation Award for a Non-member for their long dedication to the historic bur oak trees in the Champlain Park neighbourhood of Ottawa.  The award was announced in December 2020 and presented virtually (by Zoom) in November 2021.  A full write-up of their accomplishments can be found on page 59 (PDF page 13) of the April-June 2021 issue of Trail and Landscape.

At the September 16, 2020 AGM, Erwin Dreessen was awarded the Federation of Citizens’ Association’s Lifetime Achievement Award:  “For his decades of selfless volunteer work to protect and preserve greenspace in Ottawa-Gatineau. As a founding member of Greenspace Alliance, his contribution to the community has impacted neighbourhoods across the region.” A well deserved award for our co-founder, longtime member and past Chair! Pictured here with Sheila Perry, outgoing President of the FCA. 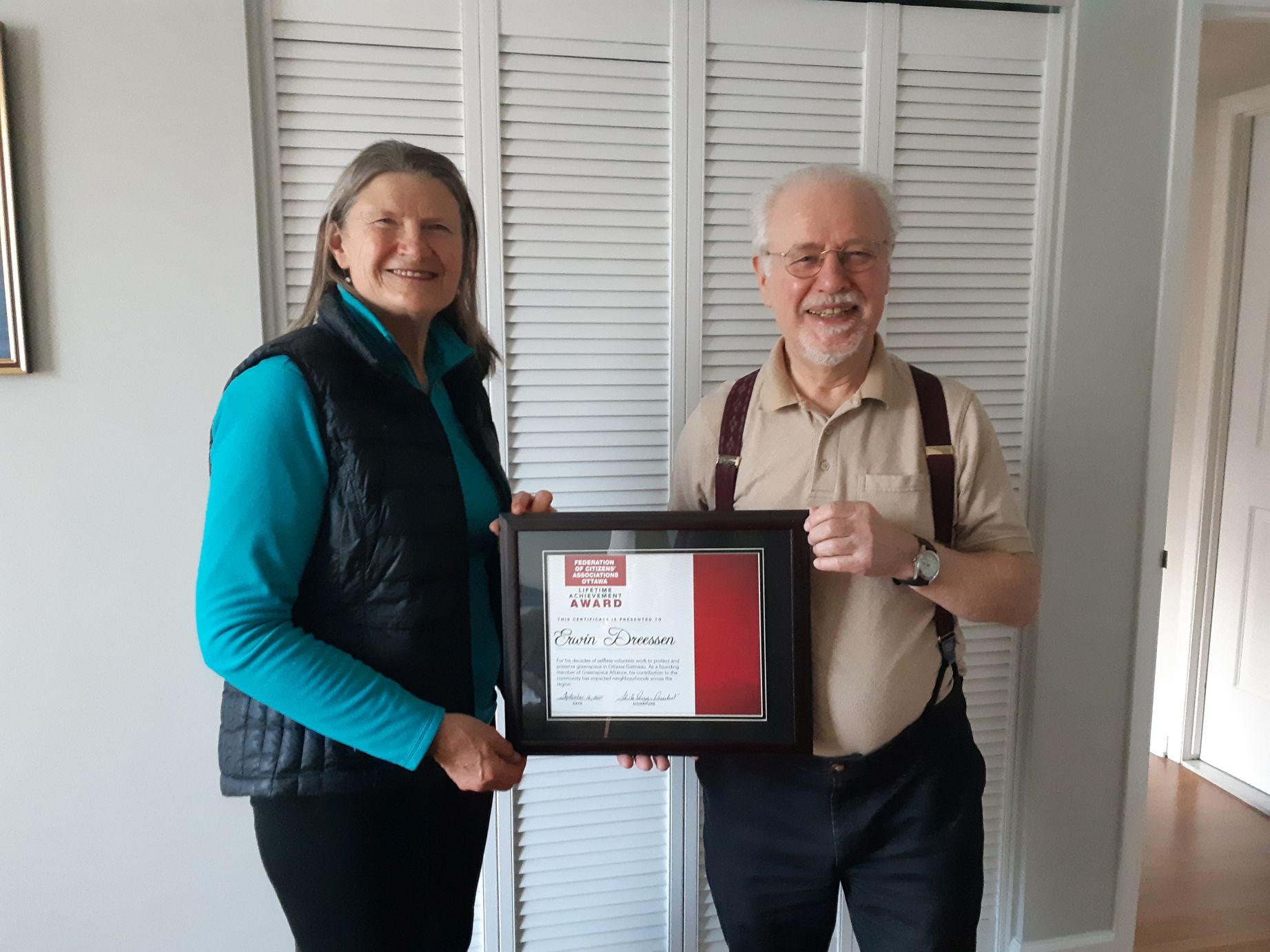 At the June 3, 2014 AGM of the Federation of Citizens’ Associations (FCA), Amy Kempster (now Amy Steele) was awarded the 2014 Lifetime Achievement Award for her “many years of community leadership and good works in the enrichment of Ottawa communities.” As the picture (*) shows, she was very pleased with that well-deserved recognition! Much of her energy has gone to the Greenspace Alliance, other beneficiaries were her local community, Champlain Park, the FCA and the Ontario Federation of Urban Neighhbourhoods, F.U.N.

Bill Royds, then member of the Conservation Committee of the Ottawa Field-Naturalists’ Club, received the Club’s Member of the Year award for 2002, mainly for his role as the liaison with the Alliance.

Erwin Dreessen received the 2002 Queen’s Golden Jubilee medal, mainly for his greenspace volunteer work.  Also that year, he received a Civic Appreciation Award from the City of Ottawa.

In 1999, Amy Kempster received the Mayor’s Award for volunteer service.