Ever since the Poets’ Pathway project was conceived, the meadow to the west of McCarthy Woods was envisaged as the central anchor of the Pathway. It is indeed here that Bill Royds, the originator of the concept, was snowshoeing one wintry day in February 1995 when the last lines of Archibald Lampman’s final poem, “Winter Uplands,” came to mind:

The crunching snowshoes and the stinging air,

And silence, frost and beauty everywhere. 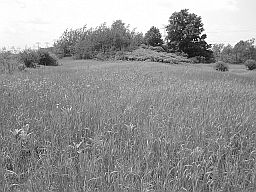 It occurred to Bill that the landscape he was looking at must have been very close to what had inspired Lampman. Thus the idea was born that preservation of this landscape would be a fitting tribute to the Confederation Poets, the poets of landscape of which Lampman was the prime exponent.

The Southern Corridor is a broad swath of land between Walkley and Hunt Club Roads. Its extent in the east-west dimension varies depending on the context — one could say it reaches as far west as Greenbank Road and as far east as Hawthorne Road. For the purposes of the Poets’ Pathway proposal, the key areas are McCarthy Woods and the meadow to its west, and the connecting open spaces up to Woodroffe Avenue in the west and Albion Road in the east.

Most of the open spaces in this Southern Corridor are on the books of the National Capital Commission. It has long been understood that the 39-ha McCarthy Woods will eventually be deeded to the City as an “Urban Natural Feature.” Another 19-ha parcel, along the Rideau River, is designated “Open Space” by the NCC. However, none of these lands are on its National Interest Land Mass list. They have been designated Surplus to its mandate since 1988. 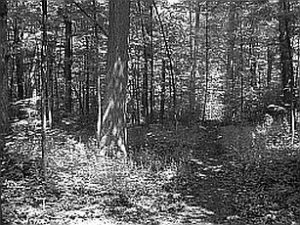 (Seaton Findlay, in Capital Woodlands [2001, page 75] describes the main woodland as “late successional upland maple-beech woodland on glacial till over limestone bedrock. It has the pleasantly open understory typical of mature broadleaf forest. … It is in fact one of the largest woodlands in Ottawa and can take you easily an hour or more to explore.”)

(John Sankey, as part of a history of the Hunt Club area, provides historical information about the corridor.)

Attempts to develop the remainder of this Southern Corridor land — including the 58-ha meadow to the west of the Woods — have been very controversial. In the mid-1990s, as part of the Hunt Club area’s new Neighbourhood Plan, various housing subdivision proposals were put forward, against the will of the community. The Public Advisory Committee resigned en masse to stop these proposals from going forward. In late 1999, then local M.P. and government Minister John Manley vowed that, as long as he was in government, the land would not be sold.

More recently, in May 2003, City Council designated a portion of the meadow, as well as a connecting corridor between Merivale Road and Woodroffe Avenue, as “Major Open Space” in its Official Plan. The NCC appealed this decision to the Ontario Municipal Board (OMB); a hearing has yet to be scheduled. The Greenspace Alliance is a Party to that appeal.

More recently still, in June 2005 the City accepted the Urban Areas Environmental Evaluation Study. The evaluation for UNA 144, “McCarthy Woods and Southern Corridor,” noted that “prime feeding habitat for urban woodland raptors (Screech Owl, Cooper’s Hawk, Merlin, etc.) [is] represented in regenerating scrub and meadow in western half of the site.” The aerial map shows that about two-thirds of the meadow is so designated.

This led the City and the NCC, in 2006, to agree on conducting a birding study. The study has not yet been released.

The NCC’s appeal was considered again at an OMB prehearing on April 23, 2007. Besides the Greenspace Alliance, representatives of the Hunt Club Community Organization, the Crestview Meadows and Community Association, the Highlands Park Ratepayers Association and the Federation of Citizens’ Association were recognized.  Supported by all parties, the OMB agreed to postpone this matter one last time, till September 2007, giving “the NCC and the City one last opportunity to settle this appeal prior to setting a hearing date.” (Decision #1361, issued May 14, 2007)

(For more on the Southern Corridor and the Greenspace Alliance, see also “About Us,” under “A Bit of History…”  A promotional text that appeared in the Riverview Park community paper of March 2001 is here.)