One key reason why the particular site of Poet’s Hill at Beechwood Cemetery was chosen, is that it offers an excellent view of Parliament Hill. The central axis of the site’s design points to the Peace Tower.

However, this view is not protected in Ottawa’s Official Plan! Nor is the even more spectacular view of Parliament Hill from the memorial to Tommy Douglas, which is nearby Poet’s Hill.

As it happened, in September 2006, the Beechwood Avenue Community Design Plan (CDP) was nearing completion. With the support of Councillors Jacques Legendre and George Bédard, as well as city staff, the Poet’s Hill Committee successfully had some intended increases in building heights at Beechwood Avenue scaled back and received a commitment from Council to initiate an Official Plan Amendment that would protect the views from Poet’s Hill and the Tommy Douglas memorial in future.

The Beechwood Avenue CDP, as amended, was approved by City Council on September 27, 2006.

The request was made to Planning and Environment Committee on September 12 by Erwin Dreessen. This was the day before the inauguration! Here are his remarks.

1. I appear to you today as a member of the Poet’s Hill Committee. This Committee is composed of representatives of the Greenspace Alliance of Canada’s Capital, the Ottawa Literary Heritage Society and Beechwood Cemetery Foundation management. The Committee has been at work since March 2005.

2. Tomorrow, September 13, will mark a milestone in the celebration of the literary heritage of Ottawa and the nation. At historic Beechwood Cemetery will take place the inauguration of a site to commemorate the great poetic tradition of Canada.  This is one access point to the site, just inside the Cemetery off Beechwood Avenue. This Poet’s Hill is the begin- or end-point of what we hope will one day be the Poets Pathway, from here to McCarthy Woods and on to Britannia. 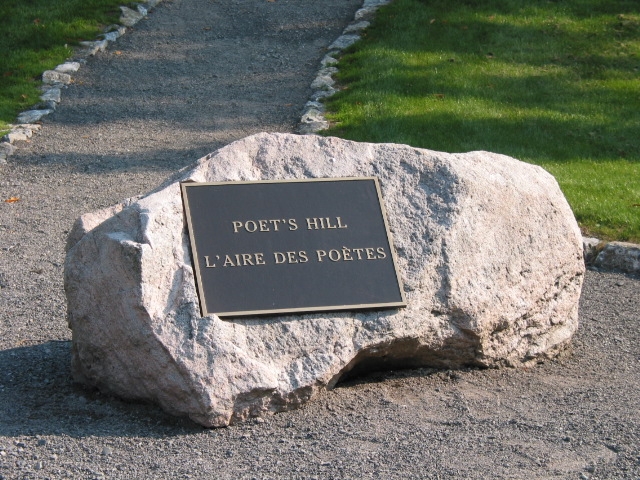 3. The unveiling will be performed by the Parliamentary Poet Laureate, Pauline Michel, by Grete Hale, chair of the Beechwood Cemetery Foundation, and by Councillor Jacques Legendre.

4. These pictures were taken last Friday morning. As you can see, they were still at work to get everything ready. The base for the lectern is there. To the right is a space where people can gather, and four flowerbeds dedicated to four poets, all buried at Beechwood, including the recently deceased John Newlove. 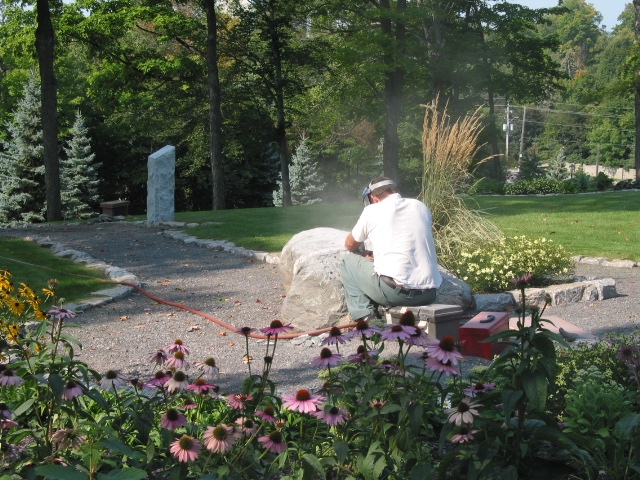 5. This inauguration is just the beginning. Only the barebones of the site have been realized to date and there are great plans for making this site the venue for a celebration of poetry in this city. Several successful events have already taken place, under the catchy title of DEAD POETS LIVE! Programming from this site is intended to be supportive of the revitalization of Beechwood Avenue as expressed also in the Community Design Plan before you. Books on Beechwood, for example, has been a partner in one of the events to date.

6. At the top of the picture is the reason why this site was chosen and why I am here before you today. The central axis of the site leads straight to Parliament Hill. Here is a better picture, though Friday morning was rather foggy. There is an excellent view of Parliament Hill. Many of the poets this project celebrates have of course an intimate connection with the building of this nation, parliamentary affairs and Ottawa, the capital, including the Confederation Poets (as they were later called) and the members of the Mouvement littéraire. In fact, Arthur Bourinot’s poem, Parliament Hill, is planned to have a prominent place in a later stage of the development of this site. 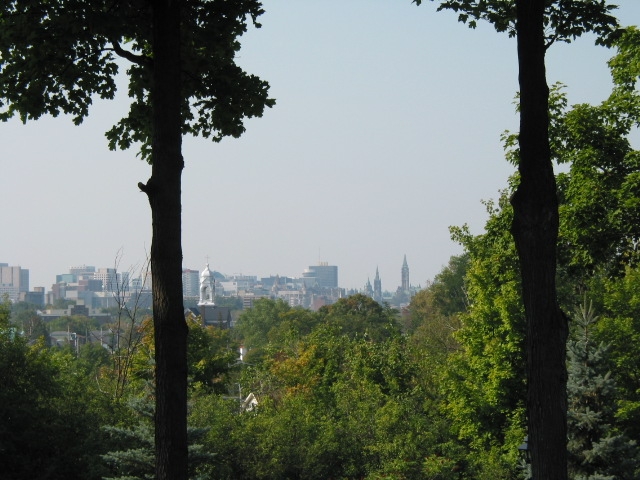 7. You have before you a motion kindly sponsored by Councillors Bédard and Legendre, to set in motion an Official Plan Amendment that would protect this view, as well as the view from the gravesite of Tommy Douglas very nearby the Poet’s Hill site. The view from here is even more spectacular and was a major reason why this site was chosen when the remains of the Hon. Tommy Douglas were transferred here from Pinecrest Cemetery in 1995.

8. This motion takes back some of the increased building heights allowed in the Zoning amendments before you, until the view protection study for the OPA has been completed. These amendments are based on the preliminary study undertaken by staff. Allow me to add that we are most appreciative of the excellent cooperation we have received from staff and both Councillors to accommodate the protection of these viewsheds.

9. At our request, Councillor Legendre has written to the Chair of the National Capital Commission to ask for the NCC’s support of this initiative. We are confident that the NCC will be supportive, as it surely is of the many other protections of the view of Parliament Hill from within the Central Area.

10. We trust you will support this Motion.