At our May 2017 monthly meeting, Ole Hendrickson, on behalf of Concerned Citizens of Renfrew County and Area, presented slides on Radioactive Wastes at Chalk River Laboratories.

The deadline for comments was originally set for August 3, but the French version of the draft Environmental Impact Statement (EIS) was not available until later, so the deadline is now August 16.  Here is the Canadian Nuclear Safety Commission‘s press release of June 16.   The Executive Summary of the EIS is here.  The actual documents (report – 95 MB; appendices – 56 MB) are available from here.  Comments must go to Nicole Frigault, Environmental Assessment Specialist, Canadian Nuclear Safety Commission, Telephone: 613-995-7948 or 1-800-668-5284, email cnsc.ea-ee.ccsn@canada.ca.

On August 3, the Green Party of Quebec held an information session at the Hotel V, 585 boul. de la Gappe, Gatineau.  Speakers were Drs. Ole Hendrickson and Gordon Edwards, President of Canadian Coalition for Nuclear Responsibility.  Here is the live stream video of the meeting (2h49m).

Ottawa Riverkeeper expressed concerns about this project (March 17, 2017).   ORK’s submission concludes that “the proposed site is not favourable”; that “the proposed technology is inadequate”; that “Dilution is not going to adequately reduce the risks associated with many of the waste products in the effluent”; that “The draft EIS is deficient when it comes to providing details for the required multi-faceted monitoring plan”; and that “the proponent has a mandate to find a quick solution for nuclear waste disposal at Chalk River Nuclear Facilities” is of concern.  Appendices provide two expert reviews, by Wilf Ruland (P.Geo.; 32 pp.) and Ole Hendrickson (Ph.D., Ecology; 24 pp.)

Ottawa Public Health sent in comments, as did the City’s Planning and Public Works Departments.  Ole Hendrickson immediately sent a sharp rebuttal, demanding that “you retract your ill-informed comments, and that you consult interested Ottawa residents prior to making any revised submission on this matter.”

The Greenspace Alliance’s letter finds the assessment of risks inadequate, the location too close to the Ottawa River, the technology “little more than a standard landfill” and expresses being dumbfounded at the speed at which the project is proposed to be completed.

The Canadian Nuclear Safety Commission today released its comments on CNL’s draft Environmental Impact Statement.  The CNSC’s media release.  Among the documents released is a 46-page table consolidating the comments from all federal agencies.  Access to the other 239 comments received is here.

Greenspace Alliance members joined in the Ottawa Riverkeeper  parade Sunday September 10 and took the opportunity to raise awareness of the near-surface nuclear waste disposal site being planned in Chalk River, just 100 km upstream from Ottawa. More people in Ottawa need to become aware of this project, which is being pushed for quick completion over the next three years.

The Canadian Nuclear Safety Commission will soon be holding open houses up river on the recently completed Environmental Impacy Study in Sheenboro, QC (Oct 2) , Pembroke, ON (Oct 3) and Deep River, ON (Oct 4), but no open houses are currently planned for Ottawa. We urge them to hold some open houses in our area as well. 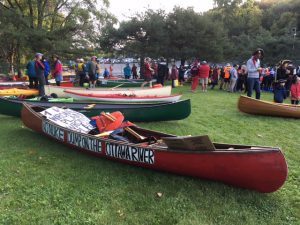 The Canadian Coalition for Nuclear Responsibility  today issued a press release  and an open letter to the Prime Minister calling upon the federal government to suspend the work at Chalk River, and two other sites, and to turn its attention to developing a federal policy on the disposal of nuclear waste other than spent fuel, which is the type of nuclear waste found at Chalk River. The Greenspace Alliance is a co-signatory to the letter, along with 35 other prominent Canadians, leaders of non-profit organizations and First Nations.

Today the Canadian Nuclear Safety Commission issued a Public Notice informing us that the proponent (Canadian Nuclear Laboratories) has amended its application by now proposing to include only low-level radio-active waste in its proposed facility, i.e. to the exclusion of intermediate-level nuclear waste.

Other reviews are continuing, including a review under the Nuclear Safety and Control Act which allows for review of health & safety and environmental concerns.

Ottawa Riverkeeper’s response is here.  It believes the location near the Ottawa River remains problematic.

The parliamentary e-petition 1220 has gathered 2,179 names so far.  It remains open till December 9.

On January 11, 2018 another petition became available, Petition E-1450, initiated by Ole Hendrickson and sponsored by Elisabeth May. It asks to:

(The sponsors advise to use Chrome, Safari or Internet Explorer as there seem to be glitches with Firefox.)

The petition is spearheaded by Deedee Sanderson, and the Old Fort William Cottagers’ Association and Raliement Contre la Polution Radioactive have co-signed the petition.  David McGuinty MP for Ottawa South is the sponsor.