The Greenspace Alliance sent a letter to the Mayor and Councillors, and to the KNL developers (Urbandale and Richcraft), calling January 4 a day of shame for Ottawa.

A petition initiated by a concerned citizen was launched on January 14.

Here is the protocol KNL is following, as conveyed by its agent, Jack Stirling.

On January 23, a delegation delivered a petition with over 2,400 names to the offices of the Mayor, Councillor Marianne Wilkinson, Minister Kathryn McGarry, Urbandale and Richcraft.  Media Release. 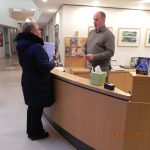 At the Mayor’s Office 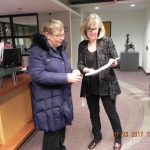 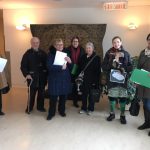 Lots of letters to the editor in the Kanata Kourier of February 2 (page 7):

https://issuu.com/kanatakourier/docs/kanata020217    A PDF of that page

Letters to the editor from Donna DuBreuil and Councillor Wilkinson:

Letter to the editor in the Kanata Kourier of February 9 (page 7):

After two months, the Avaaz petition was closed down.  The final tally was 3,403 signatures, including almost 20% from outside Canada. A reply from the Minister of Natural Resources and Forestry referred to the Overall Benefit Permit process and otherwise punted responsibility to the City. The City in turn, of course, says it had no choice if the developer had to meet provincial requirements.

As one citizen said: “Had the City and the MNRF had any real concern for wildlife, the permits could have been coordinated so that the clearing was started in the fall, i.e. on October 15th, which would have complied with the regulation regarding the Blanding’s while still giving all the other wildlife the best chance to relocate before the harsh winter months.”

For more on our earlier campaign to deny KNL an Overall Benefit Permit under the Endangered Species Act, go here.