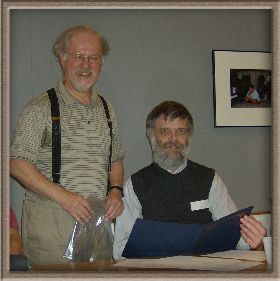 “Bill Royds joined the Ottawa Field-Naturalists’ Club In 1978. After moving to the Hunt Club area, he started walking in the nearby 100 ha portion of the Southern Corridor that is McCarthy Woods and the meadow to the west of it stretching to the Rideau River. He kept bird feeders filled throughout the winter and also developed his keen interest in photographing wildflowers. Mr. Royds led the Ottawa Field-Naturalists’ Club’s wildflower walks at the Billings Estate and taught a Sunday School course on the environment at his Unitarian Church.

In 1987 he joined the Hunt Club Community Organization (HCCO) and served on its Board of Directors for many years. In 1994 he represented HCCO on the Public Advisory Committee for the development of a vision for the neighbouring Riverside Park community.

In 1997 the Greenspace Alliance of Canada’s Capital was formed and Bill became immediately active in it. Thanks to Bill’s expertise, an e-mail list was initiated as well as a web site, which he designed. In 2002 Bill served as Vice-Chair and in 2003 and 2004 as Chair of the Alliance. In addition, Bill made numerous contributions to submissions made by the Alliance to municipal, provincial and federal authorities.

Mr. Royds also initiated the Poets’ Pathway project. Under his leadership, the concept of a commemoration to Confederation Poets through preservation of the Southern Corridor landscape was expanded to a Poets’ Pathway which would connect linear green spaces west and east of the Corridor lands over 30 km, from Britannia to Beechwood Cemetery.”