Eight years after The Ottawa Hospital decided it wanted land on the Central Experimental Farm for a new Civic campus, and sixteen months after then Minister Baird granted its wish, the public was finally invited to a public meeting under the banner “A Community Discussion on a 21st Century Hospital in the heart of Ottawa.”  Some 500 people attended the event at the Conference Centre on Coventry Road.  Among those present were Councillors Jeff Leiper, Riley Brockington and Marianne Wilkinson, Champlain LHIN chair Chantal Leclaire and MPP Lisa MacLeod.

Between 4 and 7 p.m. people wandered by boards which displayed surprisingly little solid information. Then, MC’d by Board Chair Jamie McCracken, Minister Catherine McKenna spoke for five minutes.  She agreed that the Civic “needs to be modernized,” and that “public engagement and consultation is crucial.” She spoke of the desired location being “downtown Ottawa.”

Her provincial counterpart in Ottawa Centre, Minister Yasir Naqvi, spoke a little longer, saying that this meeting was the beginning of a longer process of public engagement.  He noted that, based on the experience with other hospital projects, it takes about ten years from concept to occupancy.   Finally, he asserted that there is one thing that all parties agree on, namely that the new hospital has to be “in the core of the city.”

President and CEO Jack Kitts then held forth for about 22 minutes, repeating much of what he had sketched out before the Chamber of Commerce on February 17 as his vision for a 21st century hospital. He began, however, by expressing the hope that with this meeting TOH would begin to build trust and promised that a more comprehensive consultation process will soon follow.  He expressed regret that it had taken so long to get to this point and that the issue of location had “almost overshadowed” what TOH wants to do.

Comment.  It should be noted that TOH vigorously opposed holding public consultations until the land transfer would be official — a position it has now abandoned as the land is not yet transferred — and that its “surprise” in learning that the CEF location was an issue is the result of not having diligently pursued the implications of its choice going back to 2007.

He recalled the history of the merger of Ottawa’s hospitals and the conclusion of a planning committee.  It found, in 2006/07, that a 3-site model (General, Civic, Riverside) would be best and that a re-build on the Civic site would take too long and be more costly.  He said that the search for a new location was “comprehensive” and took over a year.  Its conclusions were conveyed to the federal government, seeing that 11 of the 12 sites reviewed were federal land.  In 2012/13 the government asked for more information, which led to the November 2014 announcement.

Comment. The preliminary and crude analysis undertaken in 2007 can hardly be called comprehensive. And Dr. Kitts glossed over the fact that when the desire to occupy part of the Farm became known in 2008, it met with vigorous opposition by Agriculture Canada and others.  “It’d be like building a hotel on Parliament Hill” is the remembered response.

Then followed an hour-long Question and Answer period, moderated by PACE’s David Sherwood; Chief of Staff Jeff Turnbull sat at the table but did not speak; responding were Dr. Kitts and COO Cameron Love. In all, 18 questions were heard.   Of these, 13 raised points about the location, most of them insisting on the importance of preserving the Farm.

The Coalition was allowed to have a table inside the room, under certain restrictions such as “no AAFC logos” and “no email addresses of Ministers.”  A good number of people provided their email address to the Coalition, wanting to be kept informed about future developments. 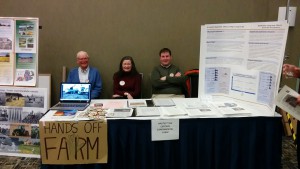 How the day started

CBC Radio 1’s Ottawa Morning program devoted a 10-minute segment to the upcoming meeting, including an interview with Dr. Kitts.  Robyn Bresnahan asked whether he worried that the alleged fraud by senior management that made the press in January had eroded confidence in the Ottawa Hospital.  Dr. Kitts responded that this matter had “shattered” him, that an erosion of confidence did worry him, and that he had “resolved to never ever ever ever let this happen again.”  In the end he was asked whether he had considered resigning.  Apparently not.  Peter Anderson and a few others live tweeted the broadcast.

A follow-up story on CBCNews (with video) was headlined “…won’t step down amid contract scandals.”

A longer companion story on CBCNews (including a link to the Ottawa Morning program and a video of McKenna’s 50-sec statement on Jan 28) previewed the public meeting and quoted Leslie Maitland as saying “There is no way of putting a hospital onto Field No. 1 without completely destroying its research capacity. There’s no getting around that.” (Also on the Heritage Ottawa site.)

CTV’s Quick Poll of the day was “Is the Experimental Farm land the best place for the Ottawa Hospital Civic Campus to expand?”  Of 2318 respondents, 54% said Yes, 46% said No.

Jennifer McIntosh wrote a report for the Metroland weeklies.  She quotes a number of the intervenors and notes that many spoke against the use of the Farm as the site for a new hospital.

Neither the Ottawa Citizen’s editors nor columnist Kelly Egan were very impressed by Monday’s meeting.  The editorial is entitled “Give Public more Input on Hospital.”  While Minister McKenna says that her office is “very, very much in listening mode,” the hospital, the editorial notes “says flatly there will be no more public sessions on where its new Civic campus will go — even though location is the main point of debate.”  It calls the whole process, including the federal decision making, “murky.”

Egan on his part (“The Ottawa Hospital says sorry, but eyes are still on the Farm”) wonders what Dr. Kitts is really sorry about when he regrets that the location issue has overshadowed the discussion, seeing that three of the four sites now being reconsidered are on the Farm.  “You know,” he writes, “there is a kind of arrogance at play here” in that matters of health are felt to be so much more important than agriculture.  He recalled Clarke Topp’s comment at the meeting: No health without food. Egan implies that insisting on being “in the core” and needing 50 to 60 acres, combined with a preference for horizontal, not vertical connections, preordains a site like the Farm’s.  Finally, in line with another comment made at the meeting, he notes that hospitals are a declining part of health care spending and wonders: “So, is the hospital of the future smaller, more nimble, more hub-like, and needing fewer beds than those of 50 years ago?”

Go back to lead article and list of pages