The City will work with the Conservation Authorities and other interested stakeholders to develop a by-law under the Municipal Act to regulate the removal of top soil, grade alteration, and placement of fill.

In July 2011 an Ontario Municipal Board hearing was told, in the words of the Decision, that “This is a bylaw that is now under active consideration at the staff level” but still nothing happened.

At the September 2014 environmental debate organized by Ecology Ottawa, candidate mayor Watson, in response to a question from Erwin Dreessen, committed to finally bringing in a site alteration by-law.  (A “strong” by-law was one of the propositions the Alliance had put to all candidates.  Eleven of the 13 winning candidates who had responded unequivocally supported that proposition; one other did so conditionally; incumbent candidate councillor Moffatt was opposed.  Media release.)  Candidate mayor Watson also promised to lobby the Provincial government for stronger penalties against landowners who act illegally.

Finally, in April 2016, staff initiated development of a by-law.  As a first step, comment was invited on a proposed framework.  Iola Price and Erwin formed an Ad Hoc GA-FCA working group with a number of  community association members which commented at this and all further stages.  Iola collected and examined by-laws of 21 municipalities, focusing on the question whether they include conditions on tree or vegetation removal.  All included a permit system.

The City issued a Discussion Paper in June 2016.  Its “Guiding Principles” included that no permit would be required, that the by-law would be integrated with the existing Drainage By-law, and that enforcement would be on a complaints basis.

The Ad Hoc group commented, making the key point that every other municipality in Ontario operates its by-law under a permit system. It also strongly objected to the notion that the by-law would not prevent sites from being prepared for development prior to planning approvals.

In January 2017, a draft by-law was distributed for review.  The draft proposed that the scope of the by-law would be limited to prohibiting:

altering or obstructing drainage that deviates from the existing pattern;

topsoil removal or other site alteration in Agricultural Resources Areas;

site alteration in the Critical Root Zone of any tree that is protected by the City’s tree protection by-laws.

The Ad Hoc group commented that this scope is deeply unsatisfactory, as it misses the key reason why a site alteration by-law is needed, namely to prevent or at least regulate site alteration on land prior to the filing of a development application.  These and other comments are here.  Some members of the Ad Hoc group met with staff on March 29 to clarify the City’s intent and our comments.

It appears that prior written approval for site alteration in or close to natural areas and optionally requiring an EIS is as far as the City is prepared to go in the direction of a permit system and imposing conditions, despite what is found in every other Ontario municipality.

Today the City made available on its web site an annotated draft by-law and much additional explanation:

Comments are invited until September 25.

“Stakeholders” were provided with additional information, including a 14-page What We Heard report which we are asked not to publish at this time.  Besides ourselves (“GA/FCA”) and the three Conservation Authorities, six other stakeholder organizations are identified.

The August version varied little in essence from the January proposal.  Good points remain that vegetation removal is considered site alteration, that no distinction is made between rural and urban land and that top soil removal or extracting peat for sale is not exempted as Normal Farm Practice.  But there is still no permit system, the scope of effective regulation is limited, and the notification provisions are very inadequate.  The Ad Hoc Group’s comments are here.  For the Carleton Landowners Association’s view, go here.

A total of 38 written submissions were received.  Several commonly heard comments, along with responses by staff, are available on the City’s web page:  https://ottawa.ca/en/city-hall/public-engagement/law/site-alteration-law-development

City staff have reviewed all of the comments received, and will consider them carefully during the finalisation of the draft by-law.  The revised by-law will be brought forward for consideration by Committee and Council in early 2018.

On the all-important absence of a permit system as exists in every other Ontario municipality that has a site alteration by-law, the “As we heard it” report has little to say:

The by-law should not operate on a complaints basis.

Some stakeholders and residents would prefer that the City implement a permit-based by-law.  They feel that the City should review and approve all site alteration activities in advance, rather than react to complaints after the fact.  Staff note that the draft by-law does require prior approval for site alteration within or adjacent to sensitive environmental lands; however, for most activities, a rules-in-regulation approach will be used.

Today Council passed the long awaited Site Alteration By-law.  The report to Council, which includes the final version of the by-law, a summary of the consultation that went into its development and extracts of the Minutes of Committee meetings, is here.  (The by-law will soon be posted in more convenient format on the City’s web site.)

On February 27, Planning Committee had approved the by-law as proposed by staff.  At Agricultural and Rural Affairs Committee on April 5, staff was asked to make a few modifications, including limiting the protection of the natural environment clause to the urban area and a band of approximately 2 km around it.  A new Schedule B to the by-law depicts the applicable area: 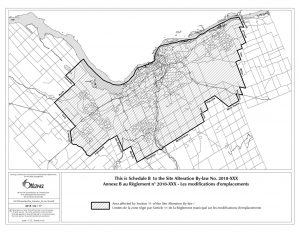 The matter returned to ARAC on May 3 and was then approved and endorsed by Council, apparently without further discussion.

Comment: With this, an effort that began in the run-up to amalgamated Ottawa’s first Official Plan of 2003, through OMB appeals and settlements, and election time campaigns and promises, has now come to an end, at least until the by-law is reviewed in two years’ time. The result is what is without a doubt the weakest site alteration by-law in any municipality in Ontario because it has no permit system.  Enforcement will be through complaints only but nobody except the abutting neighbour (if within 10 m) has to be notified.  The by-law specifies three best practices (which include sediment and erosion control measures to prevent impacts on, among other things, natural heritage features) and some do’s and don’ts but then leaves it at that.

On balance, Ottawa has a by-law that is now even weaker than originally proposed.  It correctly scopes what site alteration is, identifies exceptions that are almost all reasonable, but will not actually prevent, for example, the “massacre” of a woodlot in the rural area, even if it’s close to the urban boundary, unless it’s within 30 metres of a designated natural heritage feature, or unless a complaint is followed up fast and the chainsaw workers are slow.