The agenda was adopted as presented

a. Appointments of Board functions were deferred to the next meeting.

Judy moved, seconded by Nicole, to approve the minutes as circulated. Agreed.

Iola moved, seconded by Nicole, to approve the Minutes for posting (approval to follow at the 2015 AGM). Agreed.

d. Minutes of the General Meeting following the AGM

David moved, seconded by Nicole, to approve the Minutes as circulated. Agreed.

e. Action item from the Minutes of April 23

Re Listserv, deferred to next meeting.

f. Confirmation of the dates of future meetings

Judy moved, seconded by Amy, to accept the membership of Ray Barton. Agreed.

Nicole has completed the translation of the Annual Report.

Lorne read two of his stories, set in the mid-Potomac River region. They date from his early days in Washington, DC, during the Spring and Summer of 1998.

“Seen by a Wood Thrush” takes place during May in Glover-Archbold Park, a well-forested stream valley in Washington, DC. This story was published in the Potomac Review, Spring 1999. In addition to the story, we listened to a recording of the remarkable song of the Wood Thrush.

Note: two gifted naturalists, Shirley A. Briggs and Napier Shelton, (in impressive articles in the Atlantic Naturalist over the years 1953 – 1957) along with the Potomac Valley Conservation and Recreation Council, and Glover-Archbold Park residents, worked effectively to save the stream valley park from becoming a four-lane freeway. This may be inspiring for those working today to conserve and protect natural areas in the Ottawa-Outaouais River region.

The second story, “Summer Solstice ~ Father’s Day: Field Sketches, June 21, 1998” recounts an excursion Lorne made to Analostan or Necostin (Theodore Roosevelt) Island to greet Summer. The forested island is located in the Potomac River near Georgetown, between the Kennedy Center and the Arlington, Virginia, shoreline. This story was first shared on “the-commons list” hosted by Orion: people and nature magazine , June 22, 1998.

Michael is completing his PhD at Ottawa U and the subject of his thesis relates to accounting for ecosystems and their services. He wishes to partner with the GA because it has a good focus on wildlife and green space. His slides are attached.

Doing this kind of accounting is important. Collecting data in a very systematic way can create common ground between stakeholders and elevate the debate. To do this we must integrate statistics from different sources including the City, do extra fieldwork if necessary. I.e., the objective is to do an inventory and assessment of ecological, economic and social values of Ottawa’s ecology.

It is also important to cover a much broader scope than the simple economic value of these services and to take into account the cultural values (aesthetic, spiritual, recreational) and the environmental values (regulating, maintenance, pollination, floodplain protection, carbon storage etc.)

Michael stressed that his presentation is not yet a proposal. He hopes to come back in early Fall to make a more fleshed out proposal.

In discussion, it was noted that there have been many studies on this topic, including the recent TD study on the value of Toronto’s forests. A Chicago study looked at the link between crime and greenspace. The importance of using multiple indicators was also noted. A complementary approach that could create common ground and is much in vogue today is risk analysis. The City collects many data — most recently synthesized in the March 2011 Characterization of Ottawa’s Watersheds report — as do the Conservation Authorities in their subwatershed “report cards.”

a. Meeting with Ecology Ottawa

Erwin had suggested to include a question on support for a site alteration by-law on a questionnaire going to candidates but Ecology Ottawa’s main objective is to demonstrate that there is a constituency for environmental protection, e.g., seeking a commitment for a “strong water environment strategy.”

We need to think of other ways of bringing the urgent need for a site alteration by-law forward, as well as the desire to re-establish a reserve fund for acquisition of natural areas. These items need to get on the Priorities List for the next Term of Council if there is to be any hope of being acted upon.

b. Club of Rome project

Their offer will be followed up on with Mary Hegan or Ian.

Erwin summarized the 32 appeals that have been filed (attached). There are three appeals by community groups (including the GA’s), six by individuals or about single sites and 23 by developers. The majority of appeals are about the building heights policy, some are about employment lands, there is one appeal of the Complete Streets policy (to which Ecology Ottawa has been alerted), and two appeals question the Linkages Analysis and Schedules L. Finally, Sunset Lakes has appealed the prohibition of future country lot subdivisions.

a. Canada Lands Company at the former CFB Rockcliffe

The Public Advisory Group met for the last time in early June; Al Crosby represented the GA. CLC is now preparing a formal submission to the City for a Community Design Plan and supporting reports. In light of recent comments about community attendance of pre-consultation meetings, it is noteworthy that CLC has held 9 Public Advisory Group meetings and 3 public consultations; they would have liked to share more information with the public but the City did not want it to do so. When the proposal is submitted, the onus will be on the City to consult.

b. KNL at South March Highlands

KNL cut the Beaver Pond forest down in August 2012. The City owns a large conservation forest but Phases 7 & 8 are slated to be developed and would form a “hole in the donut.” There are major problems related to stormwater management — an Existing Conditions report has remained in draft form for more than a year, an environmental assessment has not gone forward. The City now appears set to amend the Kizell Drain by-law but is not forthcoming with any information; the item has been pulled twice from the agenda of the Agricultural and Rural Affairs Committee.

Part of a forest was clearcut a few weeks ago, land that is being assessed for its natural heritage value. In association with others, the Alliance plans to issue a media release next week. Meanwhile the Public Advisory Committee will not proceed with consideration of a community design plan.

This developer is in a hurry and has managed to get many approvals (including a draft Plan of Subdivision, April 2014); after the fact, just now (June 25) Council approved the Cardinal Creek Subwatershed Study. There is community opposition to the development plans especially because they assume that Highway 174 will be widened which is by no means certain and may not be feasible. However, the area north of Old Montreal Road has yet to be planned out. (Attachments: Cardinal Creek Village Concept; Natural Features map below.) 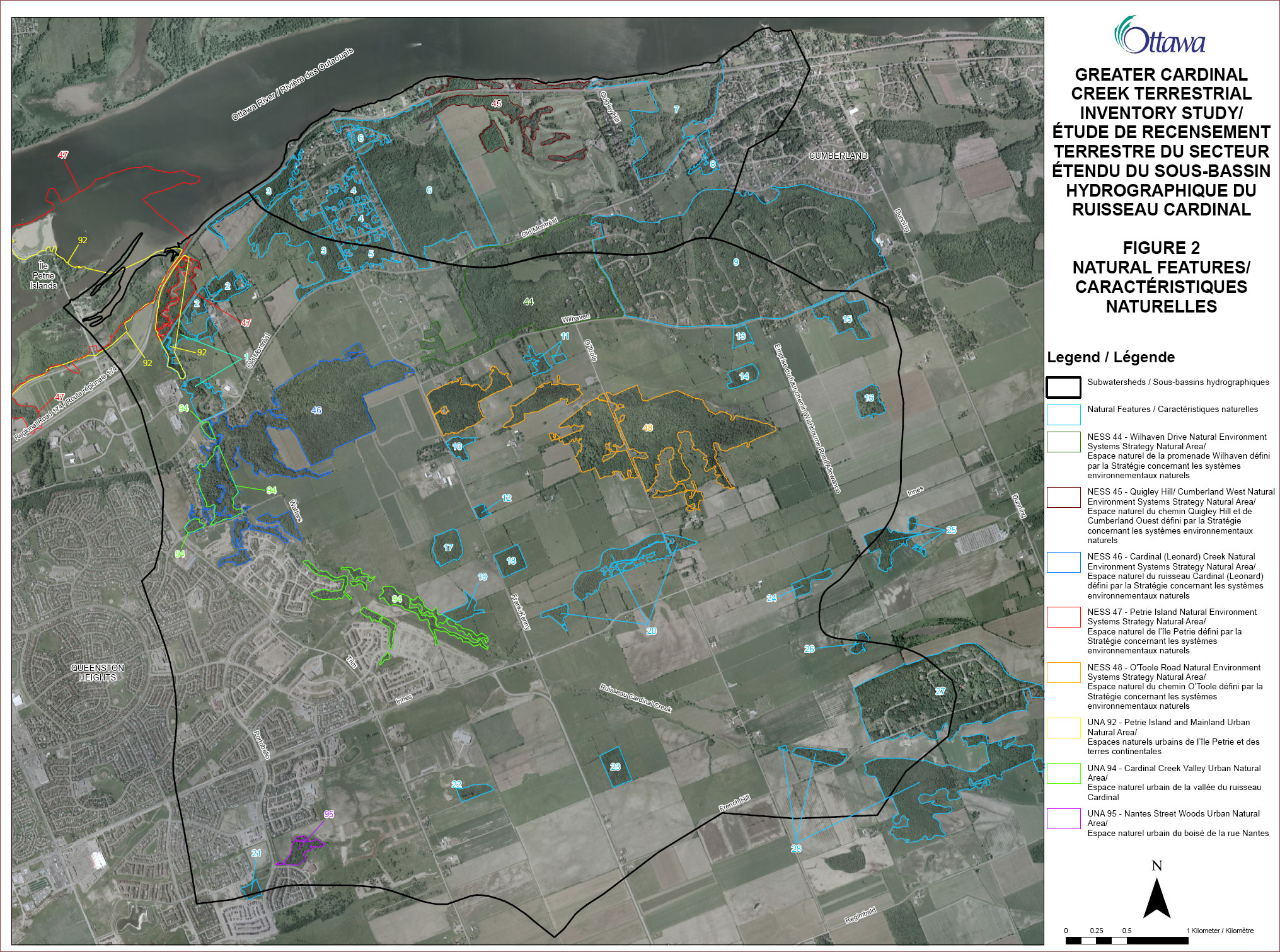 By last word, City staff will not recommend to give developers permission to build higher if they create small spaces of value to the public. There would therefore be no incentive to do it.

The results of a Phase 1 review will be considered by ARAC on July 3 and Planning Committee on July 8. There are 28 changes redefining wetlands or floodplains, mostly expanding the scope of the EP designation. Consultations on these changes went by unheeded.

Donna DuBreuil, Judy and Erwin met with John McDonnell (CPAWS-OV). There is agreement to jointly plan the symposium which will be held at the Museum of Nature and is led by the Ontario Road Ecology Group. The concern that on our side inspired the idea of a symposium — the widening of Old Richmond Road through Stony Swamp — will be incorporated in the program.

a. FCA meetings of May 12 and June 3 (AGM) — Amy received a Lifetime Achievement Award! A photo and the citation will be posted to the web site as soon as it is received.

b. NCENNetwork meeting of June 9 — There were 5 presentations by City staff on environment-related work under General Manager Dixon Weir.

c. Water Roundtable, June 14 — a report may follow next meeting.

d. Gatineau Park Trails Consultation, June 16 — Nicole attended. In 2005 the Gatineau Park Master Plan decided that conservation was to be the main focus while recreation should take second place. As well, an ecological corridor strategy was established, numerous studies on different species were done etc. But the health of the Park is deteriorating. So the NCC wants to cut back on both official and informal trails. The consultation netted the usual complainers who want more trails and some suggestions about trail management which must be addressed if they want to cut back on the numbers or the width of trails etc. Suggestions were made to work with Friends of the Park to widen its mandate and membership and to work with clubs (walking, biking etc.)